Somewhere across the country, a 9-year-old girl is waiting for a prosthetic arm so she can finally learn to swim. And right here in Apple Valley, eighth-graders at Valley Middle School of STEM  are eagerly taking on the challenge.

The students in Brian Martin’s first-period class are no strangers to technology. They have been mastering design software and 3D printers to create elaborate works of art, small machinery, sensory gadgets, even bobbleheads. But their most recent project is something different. A family member connected Martin to the Million Waves Project, a nonprofit organization that helps clean the oceans and uses plastic waste to recycle into prosthetics.

“I reached out to them in hopes of having them talk to my kids about what they do,” Martin said, expecting only a video conference or brief introduction to the initiative. “But the conversation evolved into them asking if my students would be able to design a swimming prosthetic for a 9-year-old girl.”

Typically, the organization uses designs online to print their prosthetics, but Martin said not only do his students know how to use the technology, but it would give them an opportunity to give back to someone in need. Every other day for the last month, the roughly 20 students in his class have been hard at work coming up with designs and creative ways to personalize the prosthetic arm. Martin said the students are working in groups and are responsible for creating a concept, making the 2D design and printing it in three-dimension.

“I’ve made a lot of other things using the 3D printer, but I’ve never made anything for someone who was actually going to use it,” said Sofia Ishal. “It makes me want to do my best work because it’s actually going to help someone. It’s cool because I know it’s going to make a little girl happy.”

Through this project, students are exploring intricate design software such as Adobe Illustrator and Autodesk Meshmixer, and they are using their creative skills to bring their innovative ideas to life. Martin said his students are enthusiastic about their work with this technology, but are even more determined knowing they are giving back to others in the process.

“I am completely blown away with how excited they are to be doing this,” he said. “I had many students talk about how they were excited to be doing something at school that can actually help people and have an impact on the real world.”

Three working designs of the prosthetic arm are nearly complete, Martin said, and he’s hopeful his students will have a prototype by the end of December. Once the prototype passes class inspection, the files will be sent to Million Waves Project, who will then custom fit the prosthetic for the recipient. 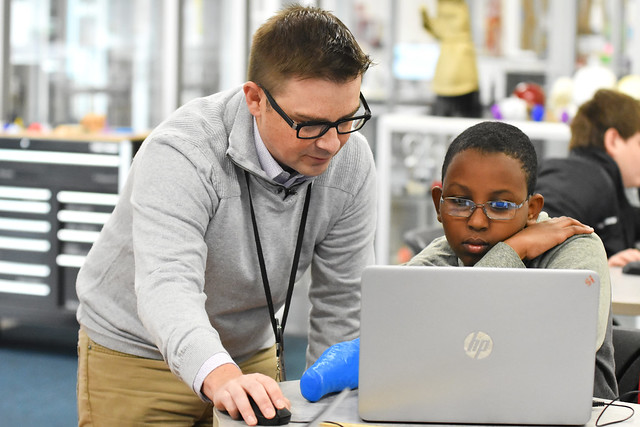